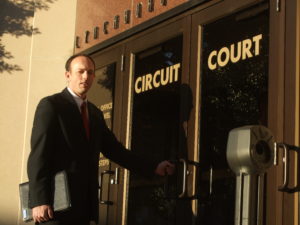 Integrity Law attorney Rick Boyer has been in the forefront of major battles to protect the constitutional guarantees of freedom of association and separation of powers.

I. Separation of Powers

Boyer served as local counsel for the conservative legal group Judicial Watch in a lawsuit against Virginia Governor Terry McAuliffe’s attempt to bypass the Virginia Constitution. McAuliffe attempted to unilaterally restore civil rights, such as the right to vote and serve on juries, to all persons convicted of felonies in Virginia, without following the constitutional requirement to first ensure that each applicant had earned the opportunity to have those rights restored.

Boyer served as counsel on one of two lawsuits against McAuliffe. The other suit, filed earlier by Republican state legislators, was successful, and the courts required the governor to follow the proper constitutional requirements for restoration of civil rights. Boyer’s lawsuit was able to be dismissed as moot due to the victory of the other lawsuit.

Boyer served as lead counsel for Republican state senate candidate Dan Moxley on a federal court challenge to the constitutionality of Virginia’s “Incumbent Protection Act.” The Act allowed congressmen and state legislators to unilaterally dictate to their political party whether the party would select its candidates by primary or convention. Boyer argued for Moxley that the Act gave incumbent politicians unconstitutional power to dictate to political parties, whose rights to freedom of association are protected by the First Amendment to the
United States Constitution.

Although Moxley’s lawsuit was denied on procedural grounds, the arguments raised by Boyer helped lay the groundwork for a new constitutional challenge to the Act.

In 2017, Republican committees from the 6 th Congressional district again challenged the Incumbent Protection Act, in a case called “Fitzgerald v. Alcorn,” Case No. 5:17-cv- 16 (W.D. Va. Jan. 19, 2018). In January 2018, federal judge Michael Urbanski, in the Western District of Virginia, struck down the Act as unconstitutional.

The result is a great victory for First Amendment free association rights of political parties in Virginia, and for the principle that political power in Virginia derives “from the consent of the governed,” not at the dictate of powerful politicians.

Below are key quotes from this landmark decision:

1. Judge Urbanski ruled, often quoting other constitutional cases, “the Constitution protects ‘the ability of citizens to band together in promoting among the electorate candidates who espouse their political views.’” “Freedom of association means not only that an individual voter has the right to associate with the political party of her choice, but also that a political party has a right to identify the people who constitute the association, and to select a standard bearer who best represents the party’s ideologies and preferences.”

2. “Allowing the incumbent to bind a party … without the party’s explicit or implicit consent – is the very definition of an unconstitutional burden on the party’s associative rights, and a sufficient reason, in and of itself, to declare [the Incumbent Protection Act] unconstitutional.”

3. “[S]tates cannot ‘prevent the parties from taking internal steps affecting their own process for the selection of candidates.’” “[A]n incumbent’s power to veto the Committee’s choice of candidate selection process hangs over [political parties] ‘like the sword over Damocles.’” “Providing incumbents with a statutory right to dictate political parties&#39; internal affairs, especially in the realm of selecting candidates, imposes a severe burden on the parties’ associational rights.”

4. “[T]he Act allows an individual incumbent to select a method of nomination over his party’s objection-a process that can hardly be characterized as ‘democratic.’”

The court applied its decision to the entire Incumbent Protection Act, whether congressional districts or state legislative districts. “The Act’s provision of benefits to incumbents contravenes political parties’ associational rights regardless of the electoral district at issue.”

As a result of the hard work of attorneys including Integrity Law’s Rick Boyer, First Amendment rights have been protected in Virginia, and more power has been returned from powerful politicians to the people of Virginia.

In 2017, Integrity Law attorney Rick Boyer argued a case before the Virginia Supreme Court. The case sought to protect the right of indigent defendants, with court-appointed attorneys, to effective assistance of counsel when appealing their criminal convictions to Virginia’s higher courts.

In the case, the state had failed in its obligation under Virginia law to protect an indigent defendant from being threatened by a co-defendant out of testifying against him. Rick Boyer was appointed to handle the defendant’s appeal to the Court of Appeals. The defendant did not realize that the state had violated her rights, and did not inform Boyer of the violation until after the appeal was filed. State law blocks defendants from raising most new appeal arguments after the appeal is initially filed.

The case is still pending, awaiting oral argument in the Supreme Court of Virginia.

If your basic Constitutional freedoms are at stake, get the experience of Integrity Law at your side.